We look at some of our favorite charity rides in Central Ohio.

Charity bike rides are awesome, whether you’re a serious cyclist putting in hundreds of miles a week, or a causal rider who prefers trips to the local park. You get to ride your bike to raise money for a cause, plus it’s a great way to set and stick to a fitness goal. Many charity rides are also “supported,” which means there are water/snack/bathroom stops along the way and maintenance vehicles to help you with mechanical issues.

So basically you get to ride your bike with friends, people give you food, and you’ll feel like a total badass when you’re done. All in the name of a deserving non-profit. Not a bad deal. Central Ohio is teeming with opportunities, and here are just a handful of our favorites, in no particular order.

Riders have raised more than $184 million for cancer research at The Ohio State University since Pelotonia began in 2008. It typically takes place the first Saturday in August, and in 2018 more than 8,400 riders participated. There are routes for cyclists of all levels, from 25 miles to 200-mile two-day rides. The organization and its volunteers have been doing this long enough that ride day operates like a well-oiled machine, with stops every 10-12 miles, sag support, and pre- and post-ride festivities. Routes begin and end in different locations, and a shuttle will bring you and your bike back to your car.

If you’ve ever fantasized about being cheered on by a crowd while you ride, this is the charity ride for you. People gather along the route with signs, and some portions draw a nice sized crowd of supporters with cowbells. Many riders are affiliated with a peloton through their workplace or local organizations. It’s not required, but it can make training for the ride and ride day itself more fun if you have a group. If you’re a rider in search of a supportive group, check out the Purple Tutu Society.

In addition to a registration fee, Pelotonia riders are responsible for raising anywhere from $1,200 - 3,000, depending on the route. It seems like an intimidating proposition, but you have February - October to meet your fundraising commitment. And 100% of the money you raise supports cancer research. 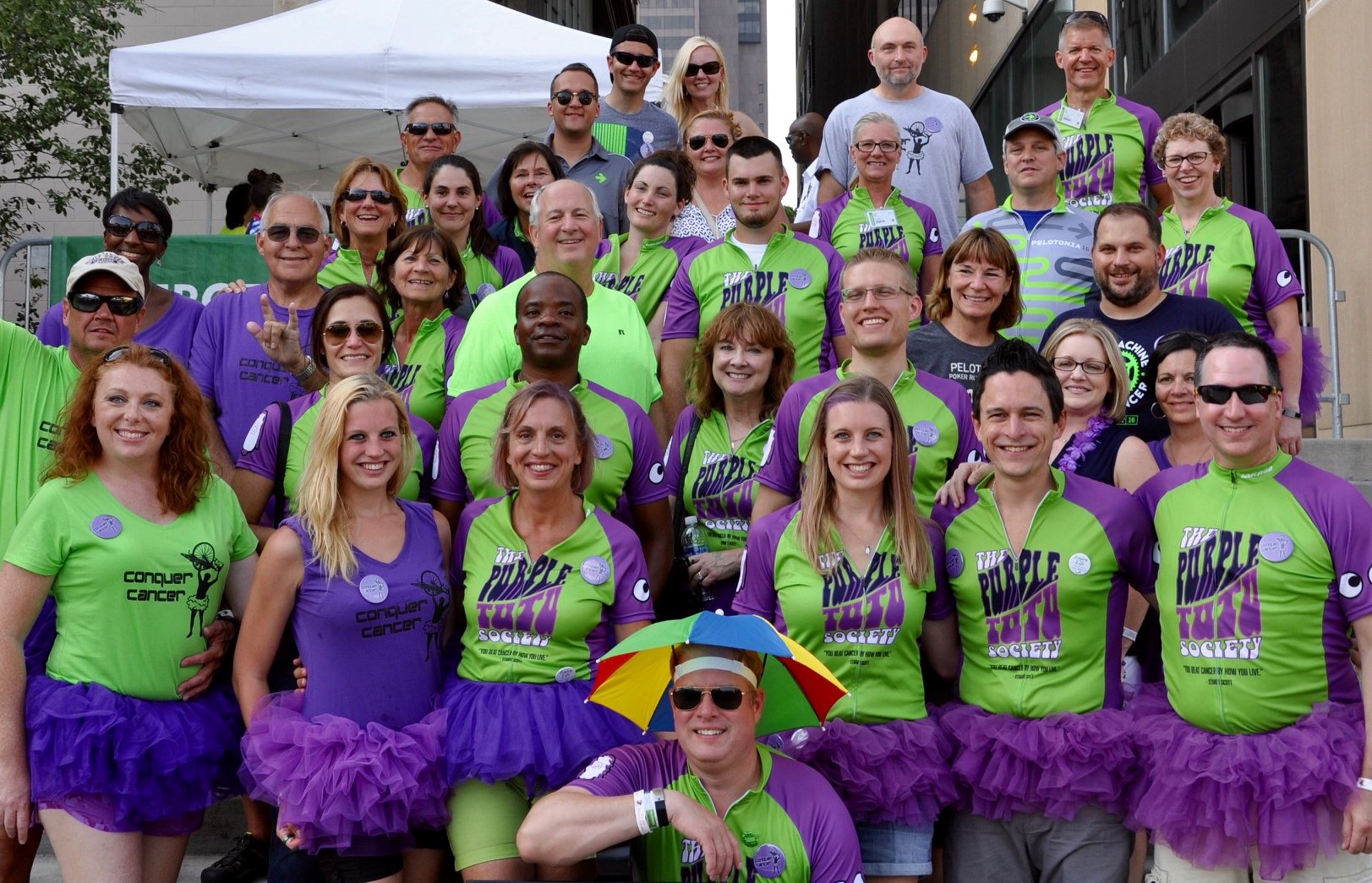 The Pan Ohio Hope Ride, which takes place in July, isn’t technically in central Ohio, but you can end or pass through the area, depending on the route you choose. The ride benefits the American Cancer Society. If you want to take a scenic tour of Ohio over multiple days, this ride is a great choice with a four-day route that begins in Cleveland and ends in Cincinnati. There are also shorter options.

This fully supported ride includes overnight accomodations in a dorm or at a campsite, three meals a day, plus plenty of water/nutrition stops every ten to 12 miles. Like Pelotonia, there’s a minimum fundraising commitment, which you have until August 31 to meet.

Routes are anywhere from 10 to 100 miles, with water/nutrition stops and sag support. If the idea of Pelotonia’s mass start is intimidating or unappealing, Pedal with Pete might be for you, as riders can start any time between 7 and 9 a.m. The post-ride cookout wraps up at 3 p.m., and ride support ends by 4 p.m., so you’ll want to plan accordingly if you’re doing a longer distance. Registration is affordable at $50 day-of or $40 in advance. There’s no additional fundraising requirement, but according to their website, the organization has been recognized “as a discerning, consistent funder of crucial seed grants for cerebral palsy research,” so any additional funds you raise or donate will be put to good use.

The Road to Success Ride benefits EduGo, a partner organization with Asia’s Hope, which provides long-term care and educational opportunities for orphans in Cambodia, Thailand, and India. EduGo provides bicycles to Asia’s Hope to provide children with reliable transportation to and from school.

The ride takes place in early November starting at Three Creeks Metropark, and has fully supported routes from 10 to 62 miles. If you’re used to flat routes, consider doing a little hill training to prepare for this one (or take one of the shorter routes). The registration fee is $50, and 100% of that supports the organization. There’s no additional fundraising obligation, although the group suggests you raise an additional $200. If you love bikes and want to help them get into the hands of kids in need, this is a great way to do that. Although the all riders start at the same time, it doesn’t have a mass start feel, and you’re not lining up in corrals.

Johnny Velo Bikes customer and blog contributor, Steph Waite, did this ride in 2018 and gives it her wholehearted recommendation. “I did this as my first metric century, and I was literally the last person to finish. It took me the entirety of the allotted time, but the organizers drove by to check on me, and they kept the stops open and made sure there was food for me when I rolled in at 3 p.m. The volunteers were supportive and helpful, and I’ll definitely be doing this one every year.”

Cranksgiving calls itself “a food drive on two wheels.” It’s a national initiative that began in New York City in 1999, but has expanded to 100 locations in 80 cities across the country. The concept is simple: ride your bike to a grocery store, get food, and deliver it to a local charity. It takes place in early November, and other than buying the food you’re going to donate, it’s free to participate in Cranksgiving Columbus. You’ll also need a backpack, panniers, a trailer, an adorable basket on the front of your bike, or some other way to transport your goods from the store to the end of the route.

The route is whatever you make of it. The organizers provide a map with a suggested bike-friendly route to hit the stores, but you can go to as many or as few of them as you’d like, and get to the end-point however you choose. If you want a good reason to gather your friends for a ride, but you’re not the “organized ride” kind of cyclist, Cranksgiving is definitely your jam. In 2018, the ride ended at Lineage Brewing in Clintonville, and groceries were donated to Beechwold Community Resources Center.

Year of Yay! isn’t one ride, it’s 12. And it doesn’t raise money for charity, but it’s led by Yay Bikes!, one of Columbus’ coolest bike advocacy organizations, and your yearly membership fee helps to fund their work. Rides take place on the second Saturday of every month, and are exclusively for Yay Bikes! members (with the exception of your first ride). Beginners are welcome, and it’s a nice introduction to riding on roads.

If you want to do a charity ride this year but aren’t sure how to get started, stop in at Johnny Velo Bikes. We can help you find the right bike and the right gear for your rides this year.